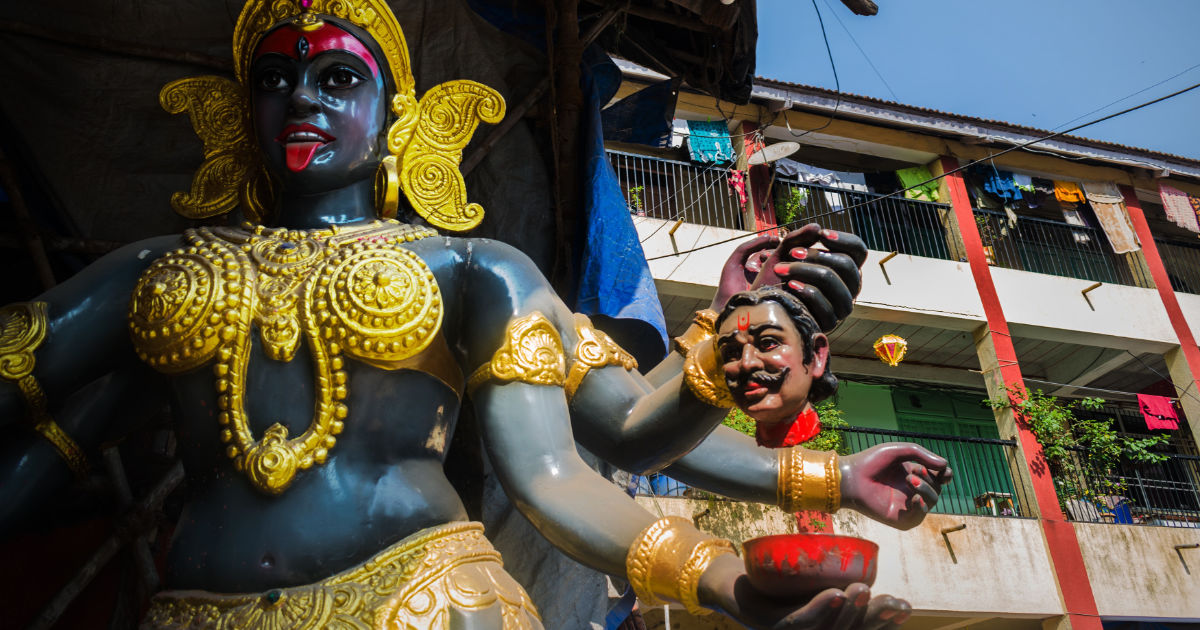 Kali Ma is both the auspicious Ambika and the terrible Kali. Kali is the relentless power of time, which in the end consumes everything. Kali represents the energy of the universe. She is Shakti.

Hers is the power to create, sustain and destroy. Her flesh is black, her tongue is red and her teeth are gleaming white. Black, red, and white represent the three gunas, tamas, rajas and sattwa. She is our mother, and we have to overcome our fear, in order to love her.

Kali has many forms, and she exposes us to these forms so that we become fearless. She presents herself in the most chilling images. She comes in the battlefield with a bloody mouth and glowing eyes. Her laughter is more menacing than the combined roaring of lions, trumpeting of elephants and barking of jackals. She ensnares all evil.

When she enters the cremation grounds, she is the essence of destruction, and everything is reduced to ash. Kali presides over the dissolution of the matter back into spirit. When she is pleased she is the loving Bhadrakali. As Shyama she is worshipped in the home altars as the banisher of fears and granter of wishes. She is also addressed as Bhavyabhayarini, who removes the fear of worldly existence.

We think that Kali Ma presents a horrifying image, but in every detail of her appearance there is a sublime truth. Her untamed hair is a sign of boundless freedom and uncontrolled power. Her three eyes look at the past, present and future. The garland of skulls is not to make us afraid but it represents creativity at its peak. Each of the fifty skulls represents a letter of the alphabet of creation and from these sounds, emanates vibrating energy which is engaged in creation. Kali’s full breasts nurture us. The girdle of severed arms around her waist express that she frees us of our karma. Her nakedness represents freedom from illusion and her shining black skin is the color of the sky at midnight representing infinity. Kali Ma’s greatest boon is dispeller of fear.

How does Kali Ma dispel our fear?

Her upper left hand wields the bloodied sword of knowledge. It represents the power of discernment. It reveals life as it is. The sword enables us to remove all the chatter and clutter in our mind. In her lower left hand, she dangles the head of a demon. This represents our ignorance. Her lower right hand extends itself in the offering of a boon, and we can ask for anything. Her upper right hand, the palm extended outward offers fearlessness. Taken together, Kali’s four hands say, “Take refuge in me, let go of your fear, let me slay your illusions and you will merge into me.” (The Hidden Wisdom of the Goddess. Devdatta Kali)