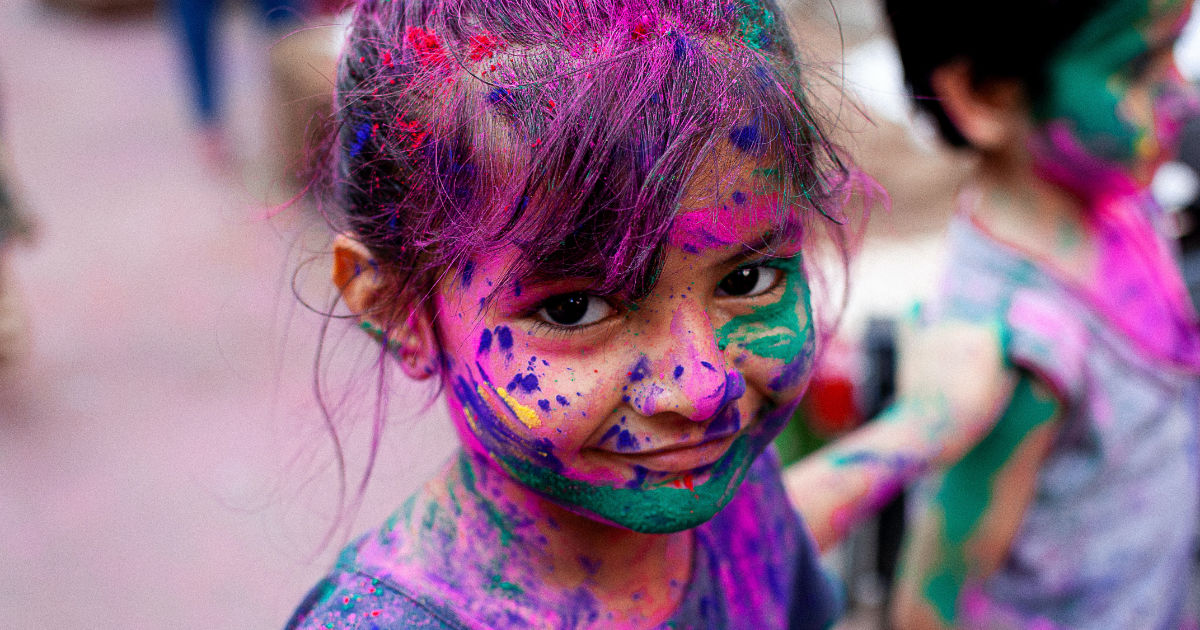 Holi is the festival of color celebrated in India with joy and fervor. It is based on two stories. The first story is about Krishna. He was blue in color and he was very embarrassed about it. His color was blue because he had been poisoned by breast milk. He was sad as all the milk maids and Radha were a golden, brown color. He was demoralized and he thought that they would not find him handsome. He complained to his mother and she said, “Just color your face.” So he did that and threw color mixed with water on all the maidens. The Gopis (milk maids) enjoyed the frolic and throwing of color, and after that everybody started playing with color.

The colors have a symbolism. Red is the color for love, passion and fertility. Red is very auspicious as brides wear it and the bindi is red in color. Blue is the color of Krishna’s face, of the sky and the oceans. Yellow is the color of knowledge, meditation and peace. It was made from turmeric. Green is the color of nature and the arrival of spring. It is said that Rama after his banishment in the forest, was calmed by the greenery in the forest. Orange is a spiritual color and the color of sunrise and sunset. Pink is the color of compassion. Purple is magic and mystery.

The classic sweet made for Holi is called Gujiya. It is a deep fried dumpling stuffed with grated coconut, thickened milk and dried fruit. The drink enjoyed is thandai which is made from almonds, fennel, saffron, rose petals, cardamom, milk and sugar. When I was a child, we played with colors which were made from dried flowers and turmeric. There was a phase when people felt that there was no joy in playing with colors which could be removed with water. The rowdy element started adding turpentine, paint and shoe polish. It was a terrible experience if one had these colors smeared on one as sometimes it took weeks to remove. However it is a beautiful festival if played with fragrant colors made from dried rose petals, sandalwood, turmeric and petals of yellow flowers.

The story that I have left for the last is: Holi is also celebrated as a triumph of good over evil. There was a king who practiced deep meditation and Shiva was so happy with him, that he granted him immortality. He was an evil king and his power went to his head. He wanted his subjects to worship him. If he was disobeyed, he killed the person who questioned him. His name was Hiranyakashipu. He ordered his son, Prahalad to pray to him. Prahalad refused to obey him as he was a disciple of Vishnu. Hiranyakashipu was furious and asked his sister, Holika to kill him. She possessed the power to not be consumed in a fire. She picked up Prahalad and walked into the fire with him. Prahalad was fearless, he kept chanting Vishnu’s name. Holika was devoured by the fire, reduced to ashes and Prahalad was saved as the boon given to her was effective only if she was alone in the fire.

A bonfire is burnt on the night before Holi, and people dance around it remembering that good is always victorious over evil. We also learn that God always protects the pure of heart.

Photo by Dhiya vignesh on Unsplash