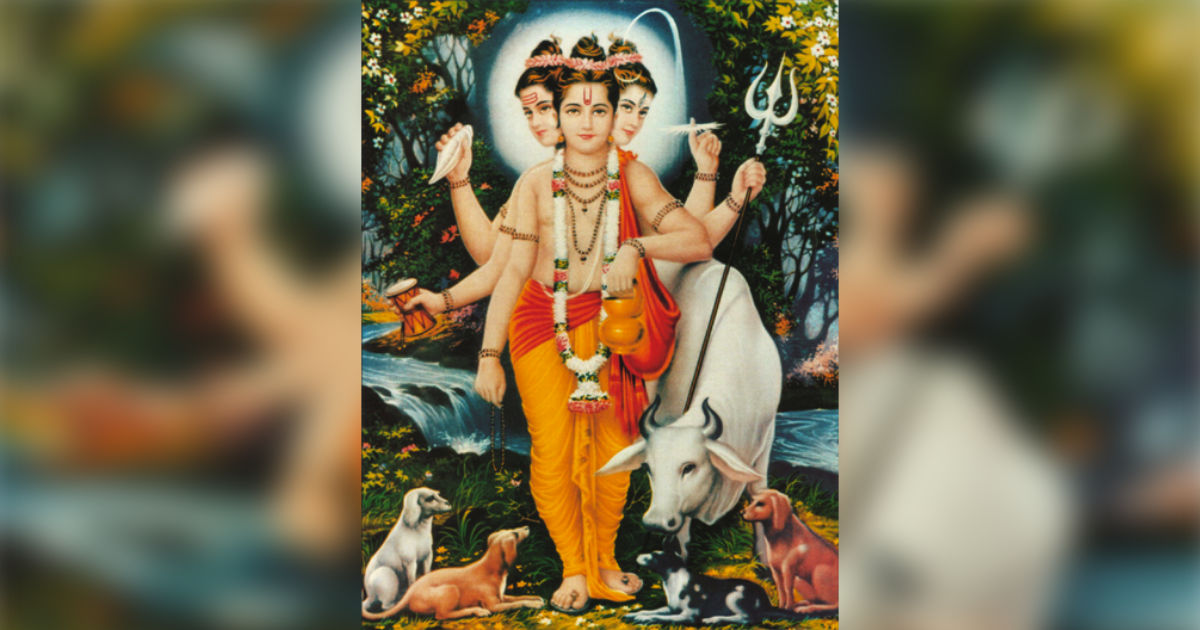 Dattatreya is the God who is an incarnation of the Divine Trinity Brahma, Vishnu and Shiva. In the Bhagwata Purana he stated that he had 24 Gurus. His first Guru was his Atman alone, but he had learnt wisdom from 24 elements and creations of God.

The five elements, earth, water, fire, air and ether purified him. Mother Earth gave unceasingly to the people, never halting despite the ravages and destruction borne upon her by man. Water purified and a pure of heart sage purified all who come in contact with him. The ocean remained unchanged. So many rivers flowed into it. The wise man should try to remain unaffected by hardships, joys and temptations.

Air was everywhere and it was detached from all. Fire consumed, and purified and the sage glowed with its vibrance. Ether contains the universe and like so the Atman was pure and never in contact with any object. The moon was beautiful but it waxed and waned. However, the Atman was always perfect, and it was our behaviour which kept changing. The sun had many reflections but it was the reflections which came in our thoughts and which had to be cleansed.

Animals taught him and became his gurus

Pigeons were family minded and once when the birdlings got trapped in a net, the mother also went in and then the father followed. This was the lesson of attachment which leads to bondage. A python was a passive creature and it stayed in one place. Like so a sage becomes indifferent to food. A moth gets singed by a flame and a man who fell for a beautiful woman gets hurt. Control the sense of sight and bring the mind back to the self.

The honeybee sucked nectar from many flowers, it does not leave one flower devoid of nectar. Take little food from homes when you beg. Do not be greedy. Bees collected honey with great difficulty but the honey gatherer take all the honey. We must not hoard material things because when our time comes we will go alone. The male elephant is blinded by lust when a female is rutting. He will even fall into a trap covered with grass. He is tortured and enslaved. Like so passion overtakes men and women. Control and overcome passion.

Do not succumb to temptation

The deer loves music and is entrapped by the hunter. Men are drawn to lusty songs and dance by women and they are entrapped by them. Do not succumb to temptation. A fish is caught because it is hungry and is tempted like so is a greedy man, who allows his sense of taste overpower him. Do not be greedy. A crow picked up a piece of meat, and he was chased by the other birds. They pecked him, and he had to drop it. He was free, no one chased him now. Do not succumb to sensual pleasures. A snake never made a burrow. He slept and lived in holes made by other animals. A sannyasin does not look for a home. He stays wherever he finds or is offered shelter (cave, temple). A spider makes its web and it gets entangled in it. A man with many ideas gets caught in his worldly web. Concentrate only on the Atman and give up worldly thoughts. The beetle catches a worm and leaves it in its nest. The poor worm cannot get out and fears the repeated sting of the beetle. The worm becomes like the beetle. The lesson is if one is obsessive about something, he will attain it. However from this you learn give up your attachments and concentrate on the Atman and attain liberation.

The other gurus were persons. There was a dancing girl called Pingala, who did not find a customer all night. She was so tired she went to sleep and she slept deeply. Like so having no expectations leads to contentment. A suckling child is happy and the reason is the child is fed. Like so we must learn to be always cheerful. The parents of a poor girl went in search of a groom for her. While they were away, another party came with an offer for her. She welcomed them and then disappeared to the barn, where she started husking the paddy. Her bangles were tinkling while she was working, so she broke the bangles leaving only two on each hand, then the visitors would not know that she was doing the work. However, the sound was still there, so she broke one more bangle on each hand and now there was no sound. She continued with her work.

Concentration is the key to Moksha

The lesson here was that if we live with many people there is discord, even two persons can cause disruption but living in solitude is essential for an ascetic. The last Guru was an arrow maker. He was working with total concentration. The king and his party passed by and he was not aware of the fanfare. A man came and asked the artisan whether the king had passed his shop. He replied that he had not seen or heard anything. From him the lesson is that concentration is the key to Moksha.

We have 24 gurus, who influenced the Sage Dattatreya. We can accept anyone to be our gurus as long as we accept the Atman as our sole guru. We find wisdom everywhere, but we have to recognize it and learn from it.