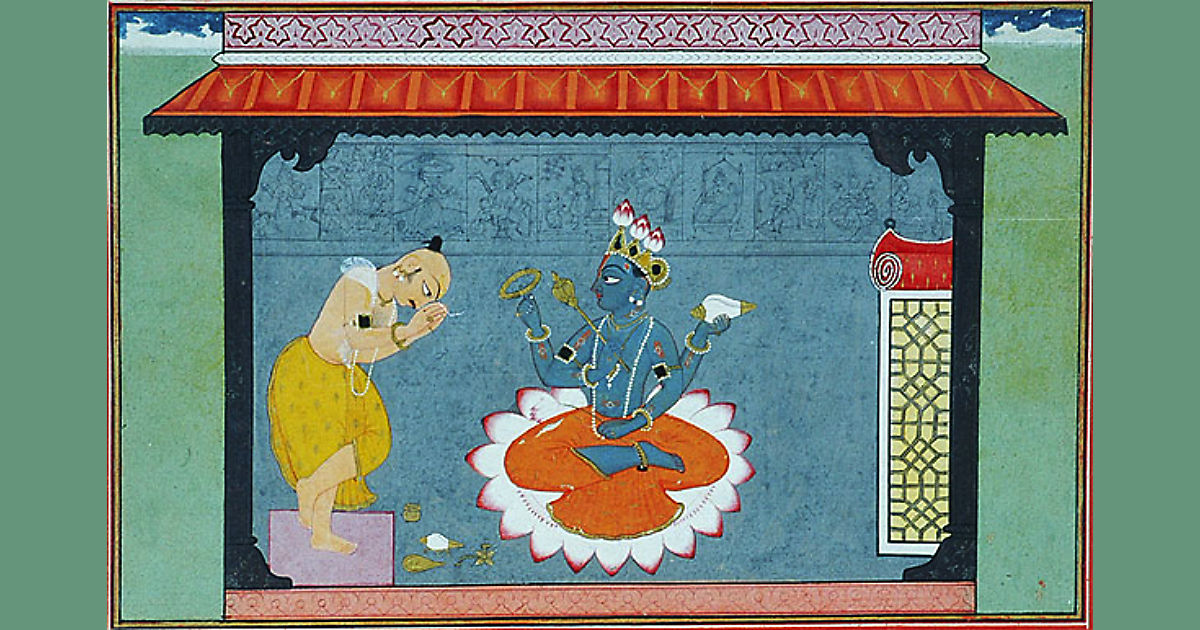 Vishnu is worshipped in Vaishnava Tantra. He is the preserver of the world. He is said to manifest in human form in every era (Yuga), to relieve the world from suffering by evil persons, who being destroyed by him also attain their moksha. In Sattva, his Narayana form, in Rajas, his Narsimhan form, and in Tamas, his Varaha form is worshipped.

Seekers of ultimate spirituality worship Narayana, in his Sattva form. He is considered the Supreme Being in Vaishnavism. Seekers of moksha pray to him.

Seekers of power and ambition pray to Narsimhan in his Rajas form. Narsimhan is the fourth incarnation of Vishnu. He is half man, half lion, and his eyes are like molten gold. His teeth are razor sharp. He is the protector in this avatara, and he killed Hiranyakasipu by with his supreme intelligence. Hiranyakasipu wicked past was relived and suffered by him and the lotus hands of Narsimhan, destroyed him.

Seekers of wealth pray to Varaha in his Tamas form. Varaha is third incarnation on earth as a boar to protect the planet earth.

Benefits of Sri Vishnu Tantra are:

Vishnu mantras Om Namo Bhagavate Vasudevaya. I bow to the Lord, who resides in the hearts of everyone. This mantra helps to develop compassion because it reminds of the presence of godly beings in every being. The emotions of love that arise from chanting this mantra help remove obstacles from one’s life.

Protector of the universe, who rests on the divine serpent and from whose navel arises the lotus with the power of creation, who is the supreme being, with the power of creation. He is all pervading like the sky with dark clouds. He has a magnificent form, Lakshmi’s lord with lotus eyes, who is perceived through the meditation of the Yogis, I salute lord Vishnu, who removes the fear of worldly existence and who is the lord of all the worlds. One become fearless by this visualization.