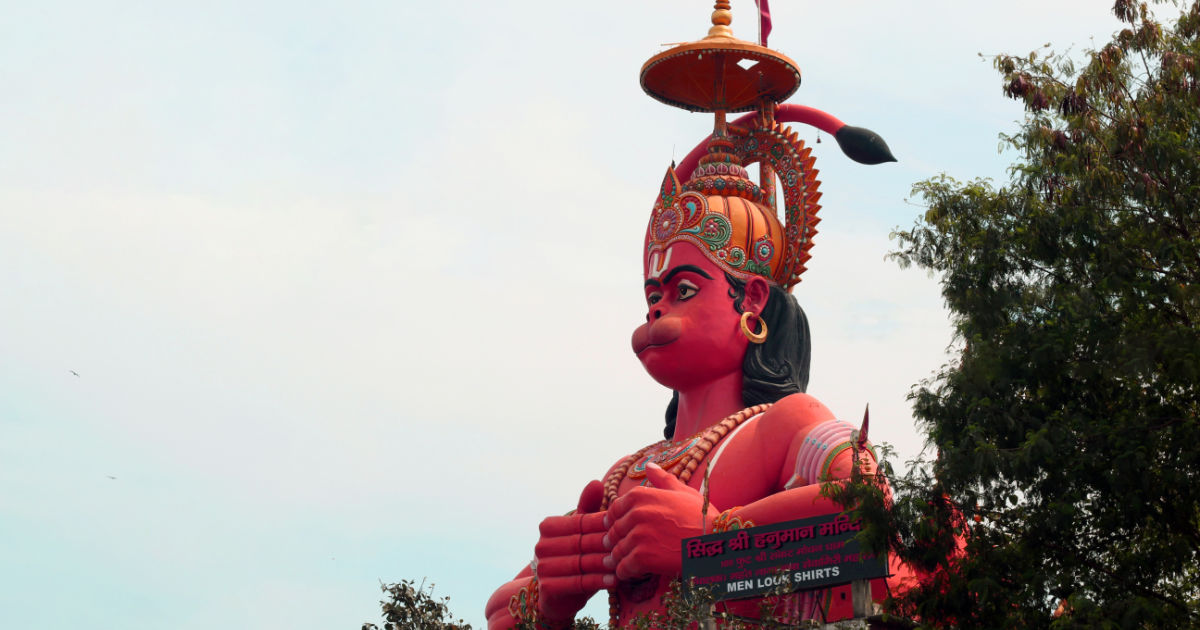 As narrated by Swami Sivananda.

Sri Rama was seated in his court at Ayodhya, after his return from Lanka. He was surrounded by wise and venerable rishis. Deva Rishi Narada, Vishwamitra, Vashishta and many others were present to advise Sri Rama. While discussing spiritual topics, Sage Narada said, “I request all of you to give your opinion on the subject of whether the Lord’s name (Nama) or the Lord himself (Nami) is superior.

A terrific argument took place, and no conclusion was come to. In the end Narada said that Nama was superior to Nami and he would prove it. Narada called Hanuman and said, “Oh, mighty hero, when you salute all the rishis and Sri Rama, do not salute Vishwamitra. He is only a Raja Rishi, and he does not deserve equal respect.”

Hanuman agreed and then he prostrated himself before all the sages except Vishwamitra. Narada turned to Vishwamitra and said to him, that Hanuman was impertinent and insolent as he had not acknowledged him. He had bowed low to all the rishis, and he must be punished for his disrespect. Vishwamitra’s face glowed with pious rage and he said to Sri Rama, “Oh great king, I have been humiliated by your servant, Hanuman in the presence of all these great rishis. He deserves to die by your hands before sunset tomorrow.”

Sri Rama was in a quandary as because he did not wish to kill his loyal servant, with his own hands and he had to obey his Guru. Hanuman was very agitated, and he went to Narada and said, “Oh divine sage, save me. Lord Rama will kill me tomorrow. I followed your advice. What should I do now?” Narada replied that Hanuman must not despair. He must follow his advice. He was to get up tomorrow morning at four a.m. Bathe in the Sarayu River. Then stand on the sandy bed of the Sarayu River and with folded hands repeat the mantra Om Sri Rama, Jaya Rama, Jaya, Jaya Ram, five times. No harm would come to him, he assured him.

The next day, Hanuman did as he was told and chanted the Sri Rama Mantra. All the citizens of Ayodhya had gathered to see the death of Hanuman. Sri Rama stood some distance away from Hanuman and started shooting arrows at him. Sri Rama had tears streaming down his face while he was showering the arrows on Hanuman. No arrow could touch Hanuman.

It happened all day and Sri Rama hurled powerful missiles at him, which had been used before to kill the rakshasas (demons), Hanuman was unscathed. Then Sri Rama decided to aim the Brahmastra (most powerful weapon in the universe) at him. Hanuman continued chanting the mantra loudly with self-surrender and love. He was smiling and fearless. The crowds shouted ‘Jaya,Jaya’. Now Narada went to Vishwamitra and said that he should control his anger as Sri Rama was tired and was going to use the unfailing misile to kill Hanuman. Nothing could harm Hanuman.

How did it matter if he was not acknowledged by Hanuman? He should save Rama from his misery. “And now you have understood the glory of Sri Rama’s name.” Vishwamitra was moved by these words and he bid Rama not to kill Hanuman. Hanuman fell at the feet of his master and saluted Vishwamitra for his kindness. Vishwamitra was very pleased, and he blessed Hanuman praising his devotion to Sri Rama. Sri Narada gave this mantra first to Hanuman, when his life was in great danger.

Swami Sivananda had said, “O beloved aspirants, you also who are burnt by the flames of samsara may repeat this mantra and obtain emancipation.”

Photo by Baatcheet Films on Unsplash